Panels of Awesome | Everything You Need To Know About Pagan Wedding
458
post-template-default,single,single-post,postid-458,single-format-standard,qode-restaurant-1.0,ajax_fade,page_not_loaded,,select-theme-ver-4.6,wpb-js-composer js-comp-ver-5.5.5,vc_responsive

Everything You Need To Know About Pagan Wedding

Everything You Need To Know About Pagan Wedding

How does one go about planning a pagan wedding? What is involved, and what can you expect? Here are some things to know about pagan weddings. 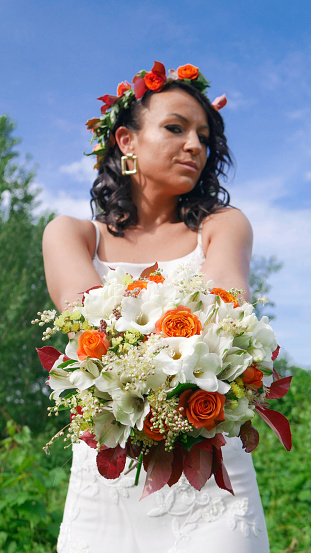 What do the pagans believe in?

“I do not worship anything, I am too small for that. But if there were gods and they cared for a man (sic), I would like to think of them as something like seeds – seeding the universe forever with life, giving everything its chance to live.” Every single Pagan path has its individual beliefs. Some may have similar references between groups but every interpretation is different. For example instead of God/Gods/Goddesses each group could have its reference to Divinity or Source whatever label fits.

Pagan weddings are not very alike like Christian or Jewish ones. The pagan does not get married under a religious figure but instead they declare their vows to one another in front of friends and family, plus any deities that may be honoured during the ritual. Sometimes handfasting is involved (tying hands together), and occasionally other rituals such as jumping the broom.

Generally speaking ever each couple feels comfortable with works for them. Some prefer to wear no ring at all, while others will wear metal bands on their left ring finger. But some pagans prefer to include rings in their wedding ceremonies by having either an exchange of rings or carving rings out of wood to symbolize their union.

What about wedding attire?

There is no set rule on the kind of clothing a groom, bride or guest should wear to a Pagan wedding. There are some pagan weddings where you do not have to wear anything at all! Others want everyone to dress up in Red and White for their big day while some prefer Black. It is really up to you what you would like to see worn on your special day depending on what your group feels comfortable with. Anyways it’s not a party until people start shedding off a few clothes, isn’t it!? 😛

How is the reception structured?

More than likely most pagans will always spend time having fun and feasting with friends and family after the wedding. However, some groups like to include a ritualistic style reception during the wedding ceremony itself, much like hand-fasting. This is where the couple will stand in front of their guests while they are being blessed with light and sound.

What do you give as gifts?

There are no set rules on what to give or receive as a gift when celebrating your pagan wedding. Some pagans prefer not to exchange any material items at all, while others want everything from Ritual Robes to Crystal Wands handed out! The best thing that you can give is whatever makes both you and your significant other happy in the end. When planning for your big day try thinking about what kind of things would complement both yourself and your future spouse well…

What about the honeymoon?

Some pagans do not celebrate their honeymoons after their weddings because of the fact they keep on travelling to different festivals year-round. But for those who would like to have a break, there are also pagan group retreats available where newly wedded couples can go to celebrate in peace with friends and family.

Having a Pagan wedding does not automatically make your wedding legally binding; you need to go through various processes (both religious and civil) for it to be officially recognized as such by current laws. This is usually done after the marriage ceremony has taken place and everyone has celebrated with a party/reception. There are some exceptions: some countries do allow weddings performed by non-state sanctioned officiants (such as Pagan clergy) to be legally recognized.